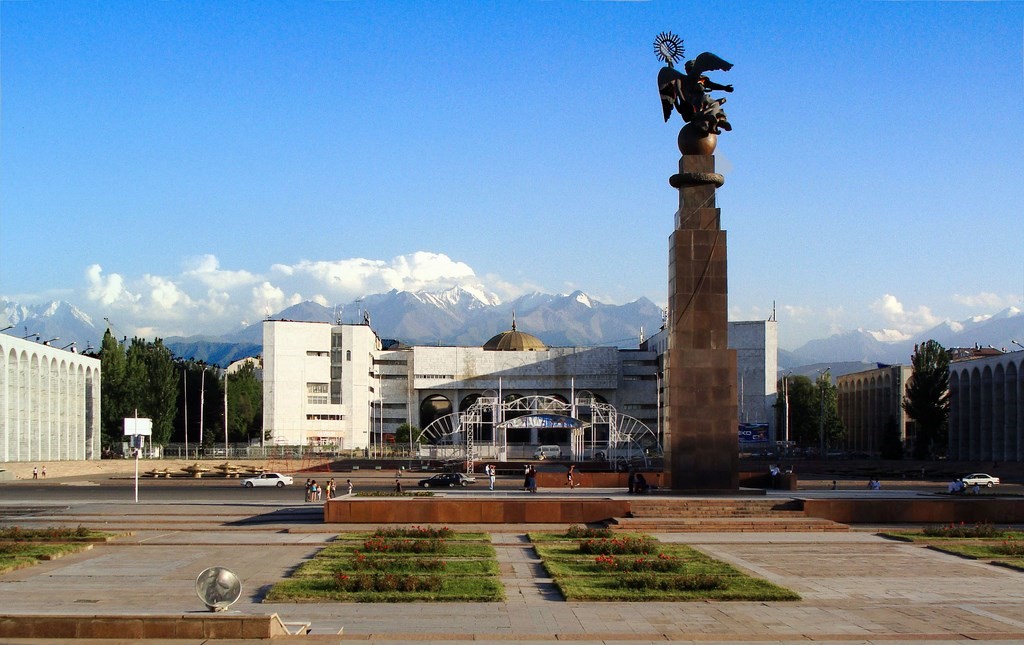 The following article will introduce 10 architectural sights in Bishkek. It is designed as a walking tour which is supposed to take about two to three hours. 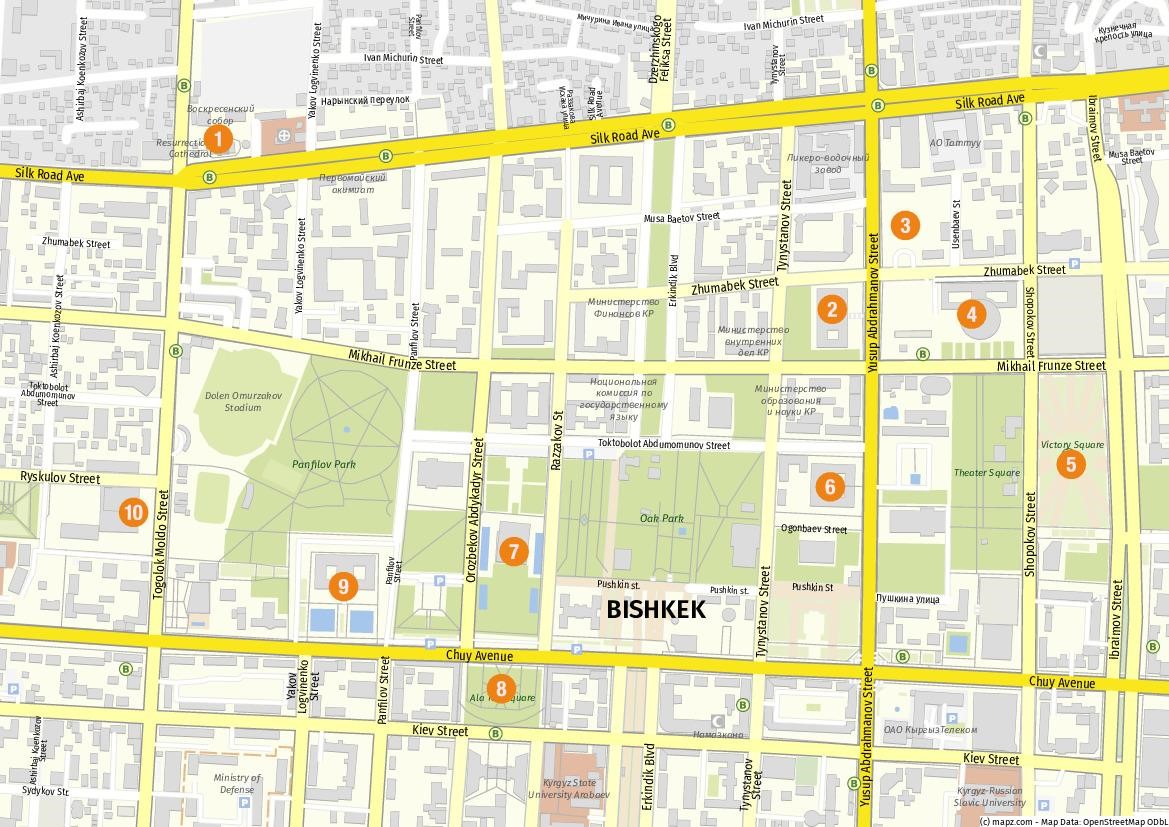 The bright blue spires of this Russian Orthodox cathedral, opened in 1947, stand out along Jibek Jolu. On the facade you can find various forms of crosses and circles, which is most impressive on the portal with its oculuses. The spartan interior, decorated with icons and studded with candles, is open to visitors. 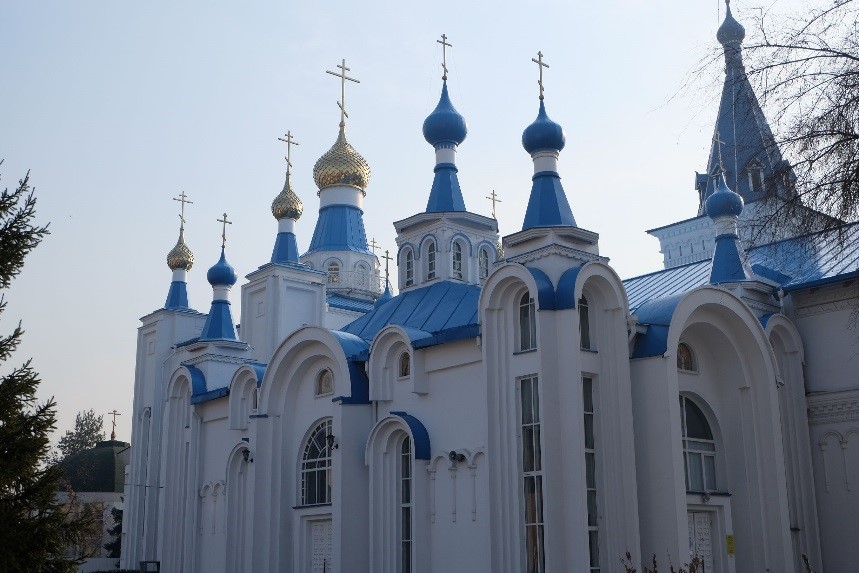 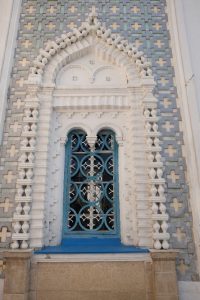 The official Library of Kyrgyzstan was founded in 1934, but the building that houses the collection opened in 1984. To get further into the library, you will need to do what everyone else does and buy a day access pass which is only 10 som. 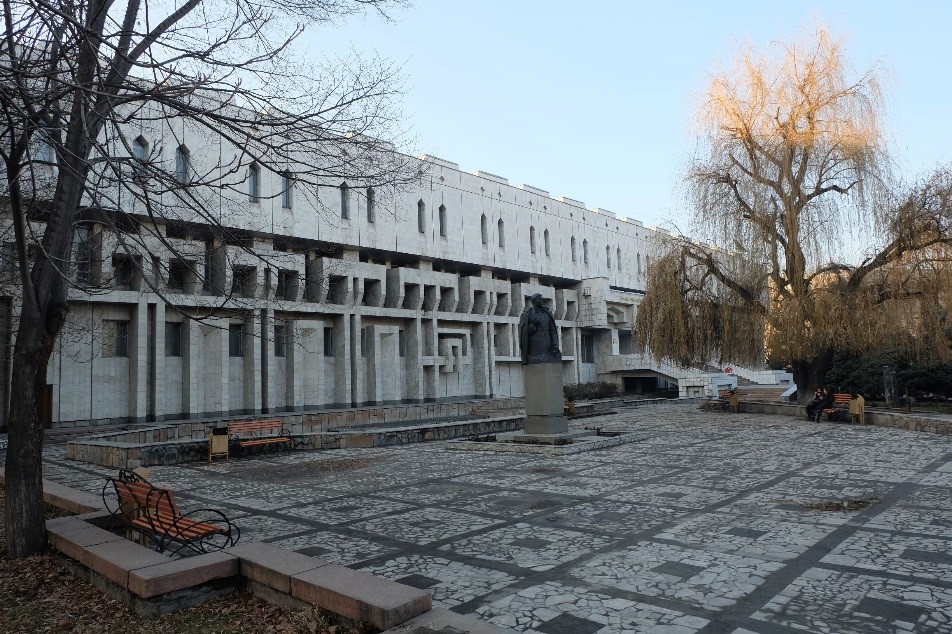 In almost every former-soviet city in Central Asia there are elaborate wedding palaces. They are community based facilities, built to give the administrative act of a wedding a celebratory glamour. The wedding palace in Bishkek is a distinctive building and is similar to sacral building in many views.

The stationary circus is part of Russian culture since the late 19th century. The one in Bishkek is formed after the archetype of the circus in Moscow. Similar circus buildings can be found in Tashkent, Dushanbe, Almaty and Donezk.

The Victory Square was opened on 9th of May 1985, the 40th anniversary of the victory against the fascist Germany. It emphasizes the importance of the «Great Patriotic War». 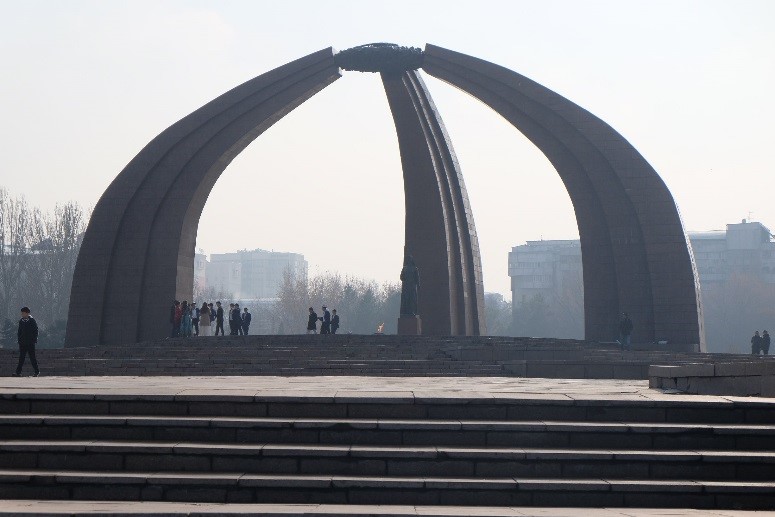 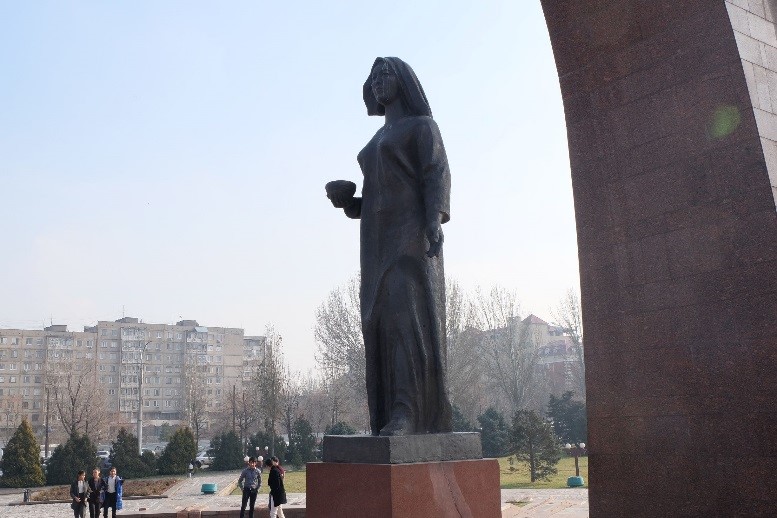 Together with the State Theater and the Opera, the Museum of Fine Arts forms a cultural centre around the oak park. Due to several renovations, some original attributes disappeared, such as the skylights and the intersections between the different rooms. 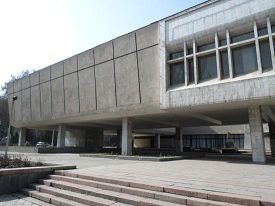 The former Lenin Museum used to be a branch of the Moscow-based Lenin Museum until the Kyrgyz independence. Right now (2018) the museum is closed due to renovations. 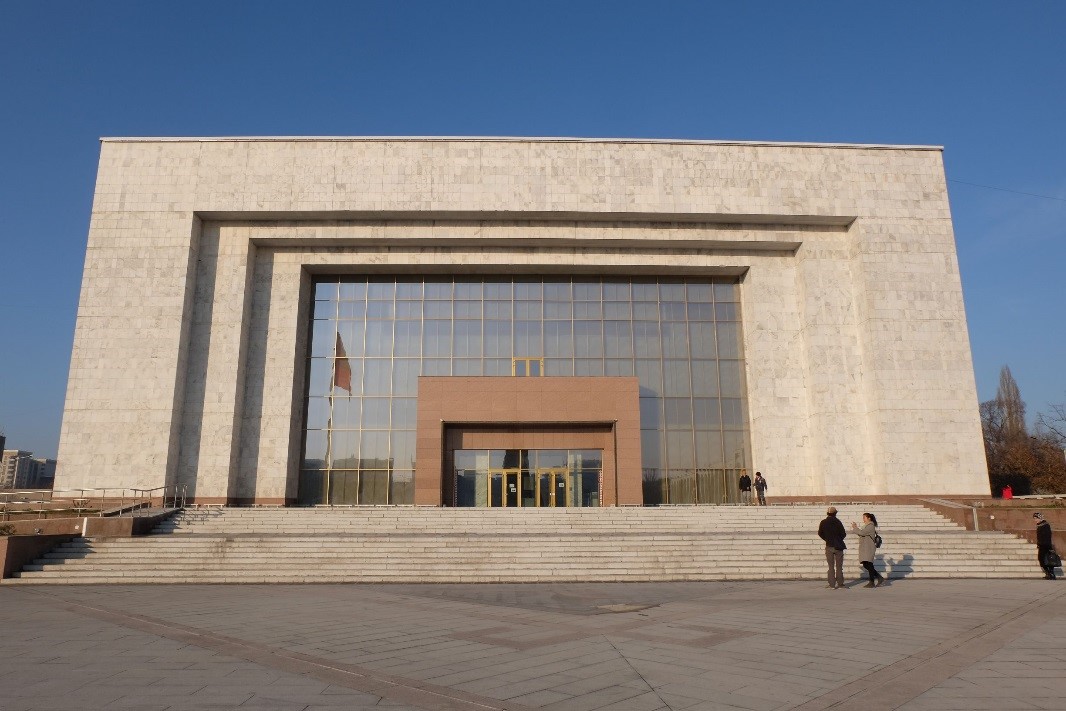 Ala-Too Square is Kyrgyzstan’s main square, located in the center of Bishkek. Ala-Too in Kyrgyz means “great mountain”, symbolizing the mountainous terrain and nature of the country. 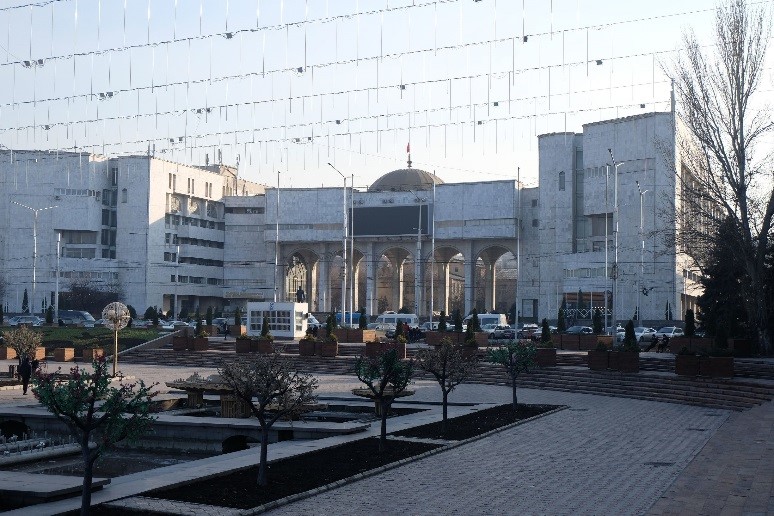 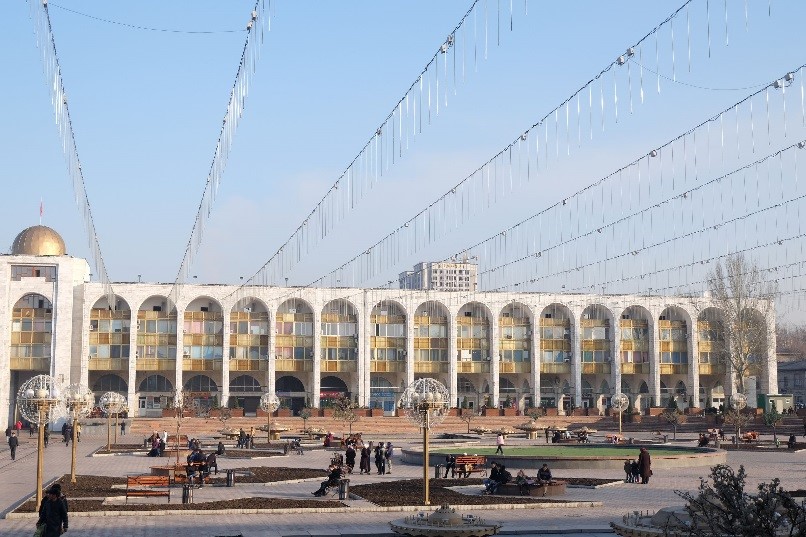 The White House is the official presidential office building of the President of the Republic of Kyrgyzstan. This building is one of the Soviet era buildings which are very interesting to see when in Bishkek, which is definitely one of the country’s landmarks as well.

The Sport Palace Kojomkul (former W.I. Lenin) is part of a bigger sport area with the Stadium Spartak on the opposite of the street. The function room takes 3,000 visitors. The entrance is at grade. To reach the function room you have to go one floor down. 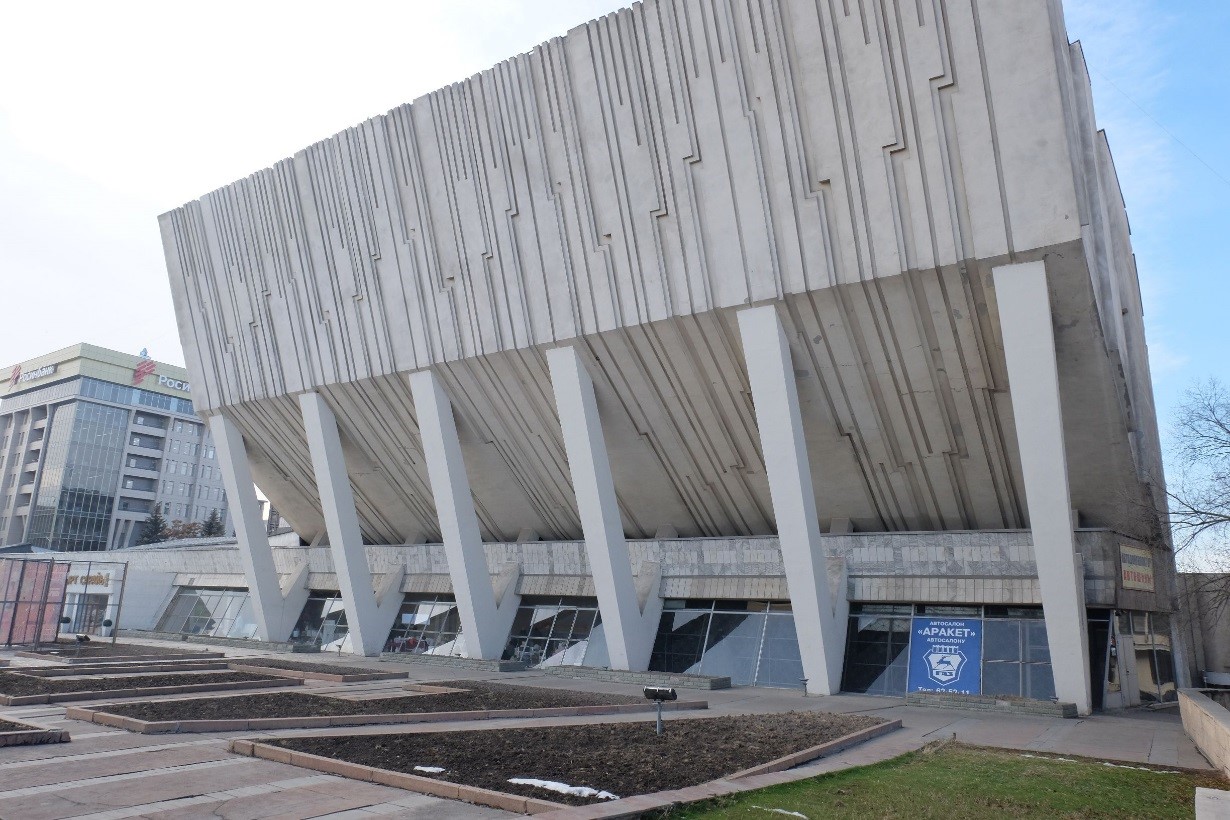 Book the Tour by: